Vampire Underground: Rescue (Book 1) (2012)
By Anthea Kage
How did I get this book? I downloaded it when it was available for free on Amazon.
Available on Amazon. 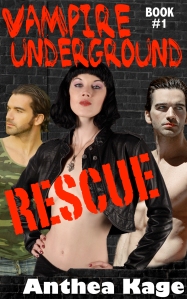 This book is a lot of fun. A steamy paranormal romance novella, Vampire Underground: Rescue does a great job balancing hotness, story, and world-building. The result is a satisfying romp.

Tess seems to be your everyday office girl, but by night she’s something else entirely. Her day job at the Vampire Disposal Agency is merely an opportunity to gather information for the opposing side — the vampire rescue movement, which is dedicated to saving vampires from execution at the hands of the government, which has wrongly convinced most of the population that vamps are too dangerous to be allowed to live.

Author Anthea Kage draws on strands of recent American history and culture, including the initial hysterical reaction to the AIDS epidemic in the late 1980s and homophobic parents’ rejection of their gay children, in constructing this novella’s world. She does a nice job of it. The vampires’ persecutors run the gamut from the grossly prejudiced and vicious to the virtuous but misinformed to the willfully blind. The vampires, far from the dangerous blood-suckers of much urban fantasy, are hounded and frightened young people much in need of help. Though vampires here stand in for a real-life persecuted group, the underlying seriousness of the message comes through.

Kage balances this nice set-up with some good characters: Tess, wrapped up in her rescue activities due to her own personal history, has gone too long without physical companionship. When her day job and her real job put her in close proximity to two very different (and, of course, very attractive) males, she finds herself unable to resist. Some hot, fun sex ensues. These portions of the book are a blast.

Definitely recommended! The book’s sequel, Vampire Underground: Resistance, is available as well. I’ll certainly be picking it up!

One thought on “Review: Vampire Underground: Rescue, by Anthea Kage”