Can Love Bring Back The Natural Balance of Things? 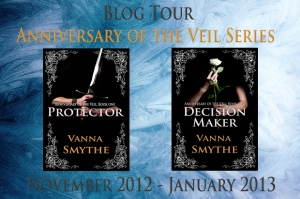 Protector (Anniversary of the Veil, Book One) is based on twin souls and the energy of love released when they find each other. The belief in twin souls, that is, a soul mate in the form of your one true love, existing somewhere in the world and pulling you towards them relentlessly and ceaselessly, is the underlying theme of Protector and the entire Anniversary of the Veil series. Only, in this world that I created the energy released when two twin souls find each other is used for purposes that are not altogether enjoyable for the pair.

In the world of the Anniversary of the Veil series, Joinings of such strong love, and the energy they release, have been used to build bridges and tall buildings, stem the flow of rivers, even change the duration and force of seasons. One thousand years ago, energy from one such pair was used to separate the world in half by a barrier only a select few can cross. On one side of this barrier, or Veil as it is called, they have continued with the forced Joinings, while on the other side the practice was eradicated. This was achieved mainly through the means of keeping the people ignorant and under the complete control of the Priesthood. The priests rule the realm from the shadows. Among other things, they also decide who can marry whom, so as to prevent any natural Joinings of love from occurring.

Protector takes place at a time when the fate of this barrier must be judged. The decision of whether the Veil should continue to stand, or if it is time to let the world be whole again, must now be made.

Princess Issa is one of a pair, called to her other half, her twin soul. She is ignorant of her true purpose, steered to go along and find her love, not knowing that a Joining waits at the end of her journey. Unbeknown to her, she is loved from a distance by Protector Kae, a soldier assigned as her bodyguard and the one whose role, whose decision, could decide the fate of all.

How long can a world where something as natural as the energy of love is twisted and used for artificial purposes exist? Will love prevail and restore the natural balance of things? What price must be paid? Answers to all these questions and more wait in Decision Maker, Book Two of the Anniversary of the Veil Series, which is already out.