Of all the beings that have lived on Earth, what if just a few had the power to make new realities, according to their desires? What would they create? The Second Emanation. A shadow world where ancient creatures persist, where humanity’s dominance is far less certain, where wonder competes with horror. A world like an autumn forest, its realities as multiple and layered as fallen leaves. The world that gives us our gods.

In Becca Mills’s Emanations series, this strange and magical world crosses paths with a seemingly ordinary young woman from the American Midwest. It’ll never be the same again. 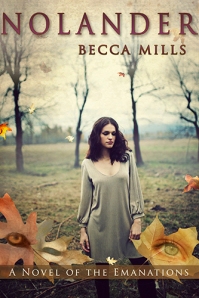 Beth Ryder knows she’s different. In a tiny rural town, being an orphaned and perpetually single amateur photographer crippled by panic disorder is pretty much guaranteed to make you stick out like a sore thumb.

But Beth doesn’t understand just how different she really is.

One day, strange things start cropping up in her photos. Things that don’t look human. Impossible things. Monstrosities. Beth thinks her hateful sister-in-law, Justine, has tampered with her pictures to play a cruel joke, but rather than admitting or denying it, Justine up and vanishes, leaving the family in disarray.

Beth’s search for Justine plunges her into a world she never knew existed, one filled with ancient and terrifying creatures. Both enemies and allies await her there—a disturbingly sexy boss, a sentient wolf with diamond fur, body-snatching dinosaur-birds. Separating the allies from the enemies is no easy chore, but in this strange new world, allies are a necessity. A plot is afoot, and Beth—whose abilities no one seems able to explain—may well hold the key to solving it. 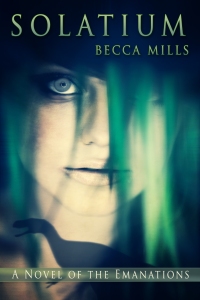 Beth Ryder’s dangerously sexy and seemingly all-powerful boss has disappeared, leaving an increasingly desperate group of Nolanders — and one inept Second — in charge of policing other-worldly activity across much of North America. What better time for a legendary monster to emerge from the Second Emanation and make New York City its hunting ground? But little does Beth know that dealing with the voracious Thirsting Ground will pale in comparison to a shocking betrayal that threatens to destroy her new life among the Nolanders.

“Theriac” is a free short story. It’s set between Solatium and the next novel in the series (tentatively titled Isolate). Available as an ebook from: Amazon.com, Google Play, Barnes & Noble, iTunes, Kobo, Scribd, Smashwords, Amazon.co.uk, Amazon.com.au, and Amazon.ca. It’s also available on the other Amazons, but some of them have not yet made it free.

The third novel in the Emanations series is tentatively titled Isolate. Yeah, I know it’s super, super, super late … but I am still working on it, promise! Barring some unforeseen disaster of the sort that can befall anyone, I’ll get it done eventually.

Want to be notified when I bring out a new book? Sign up for my New Releases notifications list!

To be clear, this is not a “newsletter.” I only email folks when I publish — a handful of time times a year, at most. You can remove yourself from the list any time you like through a link that appears in every email.

Truly, I hate spammers with the fire of a thousand suns and wouldn’t want to be one! And of course, I will never share your name or email address with anyone outside my publishing operation.

Like the generations of leaves, the lives of mortal men. / Now the wind scatters the old leaves across the earth, / now the living timber bursts with the new buds / and spring comes round again.
Loading Comments...